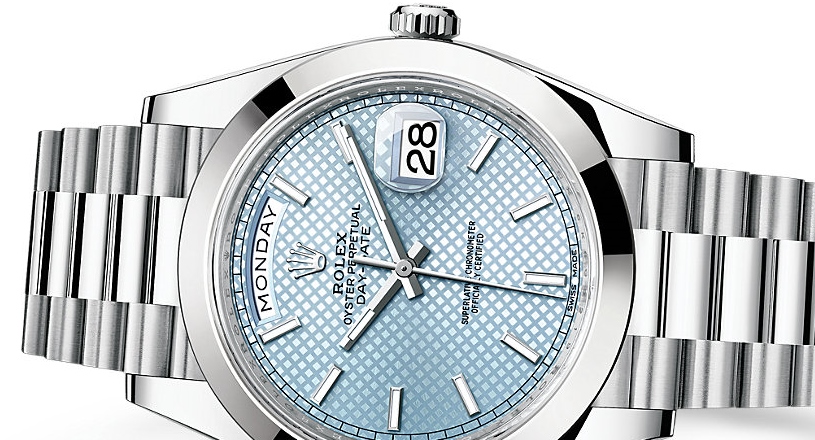 Rolex makes great watches and unfortunately there are many fakes flooding eBay and other places. Many fakes are easily spotted. Such fakes range from Japanese quartz movement pieces to flimsy dials and bezels. There are modern fakes that are very well made and hard to spot as fakes, most of these being Swiss made fakes.

Below are some tests that apply to all mechanical Oysters. Some well made fakes might slip through these beginning tests. If you are still in doubt, have the seller open the watch case and check the caliber. If they refuse to do so then DO NOT buy from them, regardless of the “good deal” they try to give you. Many sellers prey on a buyer’s greed and offer such a low price that the buyer’s greed will override their common sense. Do not be one of these buyers.

Test #1 – Check if the watch you are being offered even exists. Many fakes are of watches that Rolex does not even make! Go to Rolex’s website for their line of currently produced models. They have in depth pictures that can be very helpful in determining their real ones from a fake one being offered. You can sometimes find information on discontinued models in older literature, but in those cases check the movement.

Test #2 – If the watch is stopped you should be able to move it in a few clockwise circular movements and it will run. Rolex’s automatic movement is reliable and should not be broken. If it refuses to run I would not buy it.

Test #3 – The second hand should sweep smoothly, not tick or have any other mannerisms. Any other motion by the second hand is quartz movement and a fake (with the exception of Rolex’s Oysterquartz models).

Test #4 – A second hand that appears to float or sweep smoothly could still be a fake. An authentic Rolex second hand will move about 5-6 times per second giving it the sweeping motion. Does the watch give a ticking sound or is it jumpy and random in its sweeping second hand motion? If so, then it is most certainly a fake. Some older models may have a noticeable 5 ticks a second, but it will be consistent, never jerky or random.

Test #5 – Listen to the ticking. It should be almost inaudible with a very fast beat. Slow ticking is a sure sign of a fake.

Test #6 – When you apply the circular motion in Test #2 put it to your ear and listen to it carefully. The motion makes the winding motor go round. On an authentic Rolex you should not be able to hear the rotor.

Test #7 – Test the crown and move it and maneuver it. The crown of an authentic Rolex is always a screw down one with a diameter of 6mm for most and 5mm on early Oysters. The crown must bear the Rolex crown with a line under it or three dots for the triplock crown on the Submariner model and Sea Dweller model (these models are 8mm).

Test #8 – The crown’s stem has an o-ring which is uncovered when the crown is unscrewed and pulled out. This is on triplock crowns such as the Submariner, Sea Dweller, etc.).

Test #9 – Look carefully at the dial and hands. The dial should have certain inscriptions (some models will not have certain inscriptions). These inscriptions should be clear and crisp. They should be nicely colored and finished. Fakes are notorious for poor inscriptions, mismarkings, and misplaced inscriptions. The hands on fakes many times are too short and misshaped. The fakes also many times will have mixed up the hands for other models with the model you are looking at. For example, a Daytona has rounded ends on the hands, but many fakes will use the flat tipped Day-Date hands. A common thread in the fakes in inconsistency and lack of attention to detail.

Test #10 – The hour markers, second hand, hour hand, and minute hand should all match the case. That is to say that they should have a gold color for gold and two tone model cases. For silver model cases they should be silver. This is not universal, as older models can have all manner of different coloration combos. This mainly applies to current models.

Test #11 – The bottom of the Rolex case will never have a glass bottom. The bottom is steel normally and bears no hallmarks, inscriptions, serial numbers, logos, etc. It will be plain, with the possible exception of a previous owner’s personal engravings. There are a few authentic watches that have “Rolex” engraved on the back along with COMEX. These watches are rare and highly desirable. Other exceptions to this rule are ladies’ models pre-mid 1990 which had “Original Rolex Design” or a similar phrase engraved on the caseback in an arc pattern. The Sea-Dweller caseback have “Rolex Oyster Original Gas Escape Valve” engraved around the outside of the caseback in an arc pattern.

Test #12 – The bezel should match the dial color and the model. See reference numbers below.

Test #13 – An authentic Rolex case is very well finished. It does not have sharp edges with the exception of the lug ends. The sides of the case are mirror polished flawlessly.

Test #15 – If no numbers are found between the lugs then the watch is a fake. The correct numbers do help ensure it is real, as wrong numbers assure it is a fake.

Test #17 – If the watch in question is gold then be sure to check and see if the name “Montre Rolex S.A.” is engraved inside the works of the watch. The well made gold fakes have been engraved with false numbers.

Test #18 – Gold, diamonds, etc. should be checked by a certified jeweler for authenticity. No Rolex used fake gold, plating, etc.

Test #19 – Date magnification crystal should magnify the date 2.5 times greater than its normal. The fakes barely magnify, if at all. Some fakes now just have larger numbers so that it gives the appearance of the date being magnified. An authentic Rolex’s date magnification will make the number almost fill the magnification crystal; the fakes do not duplicate this or do so in a blurry and poor way making them easily noticeable as fakes.

Test #20 – Yacht-master’s have a larger minute hand than normal. Fake Rolexes have the same size minute hand as other Rolex models in order to save money from having to produce a minute hand for only one model. This is an easy way to spota fake Yacht-master.

Rolex model numbers have 4-5 digits. The first two or three tell you the type of watch. If the watch has five digits, the second from the last describes the type of bezel the model should have. The last number describes the metal that the watch is made from (with a few exceptions).

You can find the year that your watch was made by looking for your Rolex serial number below;